the love of all things electronic.

Not much, due to time constraints between my job and my classes. I’ve unlocked another character in Risk of Rain, and I finished the two stories I needed in the King of Fighters. After this weekend, Hopefully I’ll have more to say.

Not much really. With classes starting up and stuff to do for my job, I only have a little time to play. I’ve done a few more story mode teams in the King of Fighters XIV, and a little bit of Rocket League here and there, but that’s about it.

I’ve been playing a little bit of everything, honestly. I jumped a star system or two in No Man’s Sky. I’ve been playing a bit of hard mode Downwell. I’ve also been working through story mode in the King of Fighters XIV with each pre-set team.

Also on Tuesday, Worms W.M.D. released, and I’m interested in picking it up, but I personally feel as though $30 is pretty steep for a Worms game. If anyone has any insight into that, I’d love to hear it.

When I downloaded the demo for the King of Fighters XIV, I was not impressed. They gave us 3 returning characters and 3 new characters, and the returning characters weren’t ones that I cared too much for. And it wasn’t even the characters, it just seemed… I don’t know, clunky. Therefore I was a little skeptical about even purchasing XIV. That said, I am a King of Fighters fan and my friend convinced me it may be better with the full roster, so I went for it.

With the full character roster, I’m happy with what we’ve got. I can now play as some of my favorites, although a number of cool characters that I wish were present are missing… Primarily Whip, Vanessa, Blue Mary, Shermie, and May Lee. At any rate, there are 50 characters: 32 returners and 18 newcomers. Some of the newcomers are hit or miss, however, like the straight-out-of a 14 year old’s Deviant Art Shun’ei and his headphones, beads, and asymmetrical design… He’s a miss. That said, Mian, the mask-wearing kung-fu girl who switches her mask whenever her face is hidden, is a really neat character design with a pretty great moveset.

The mechanics are a little dumbed down from other KoF games, but this is a good thing, I think, as some mechanics in other KoFs seemed a little convoluted, in my opinion. That said, I don’t have too much of a grasp on the more technical techniques, like canceling special moves into super moves, but after clearing the story mode a few times, I wonder if it may be too easy to super cancel. Another qualm I have is the new Rush mechanic. It seems all fighting games these days are adding in something like this in an attempt to make combos more accessible for newcomers, but in my opinion, it kind of takes away. In short, mash Square when you’re close to someone and you’ll auto-combo and even end in a super if you have enough special gauge to do so. If not, you’ll end in a normal special move. I feel like it kind of trivializes trying to learn new combos and things, as you know that this mechanic will guarantee decent damage and is incredibly easy to perform; just wait for an opening. The other mechanics are pretty straightforward; 1 gauge for a super move, 2 gauges for an even stronger version of that super by pressing both buttons, or 3 gauges for a climax move, which deals nearly half of the opponent’s HP. Finally, you can activate MAX mode with 1 gauge which enables you to use EX special moves by using both buttons in your command.

The story mode is pretty much a joke, the story is not really interesting, and the sub and final bosses are complete pushovers in comparison to other KoF bosses. However, I’d rather the bosses be pushovers, because some of the bosses in prior KoFs are unrelenting torrents of misery and hate. In fact, the only way to really beat some of those bosses was to find a move that the boss’s AI wasn;t sure how to deal with and just ship away. Luckily, the bosses in XIV are, a bit overpowered, but definitely fair. All of this being said, I still enjoyed the sub-boss’s personality (and cigars).

I haven’t touched any of the other modes, like mission, time trial, survival, and online, so I can’t give a full review, just this first impression post. All in all, I’m happy with the new King of Fighters. I can’t wait to play with some of my friends and get their opinions on it too.

What do you think of the new King of Fighters, or the series in general? Which characters do you miss? Comment and tell me about it!

In the morning before training for my job, I played some No Man’s Sky and I finally found the ship I will be flying for a long time to come. Here she is: 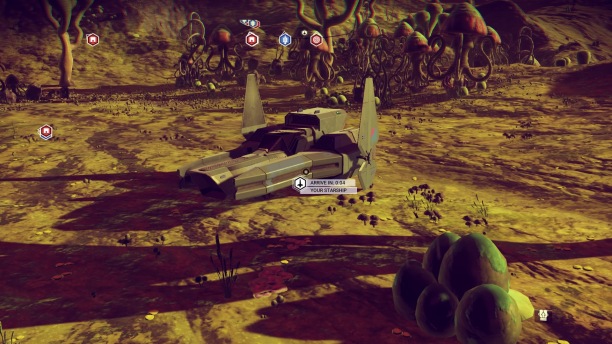 And the view from behind: 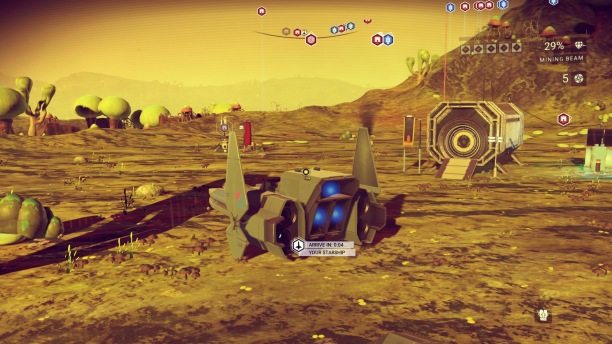 I’m loving it. I installed all the available upgrades, and they’re all in complete synergy. I also rearranged my exosuit upgrades for maximum synergy as well. Center of the galaxy, here I come!

The King of Fighters XIV also came out yesterday, and I only got a bit of time with it. It seems cool, but I really don’t have an honest opinion of it. My first thoughts are that the characters I love from the older KoFs seem to be very similar mechanically, but I’m sad that some of my favorite characters haven’t returned, like Vanessa and Shermie, but new characters that I don’t really care for are in their place. Special and super moves seem more accessible than ever, with fairly simple inputs, and the mechanics are fleshed out very well in the tutorial. More KoF information is forthcoming.

I’m a pretty big King of Fighters fan, and while I wasn’t impressed with the demo, I’m hoping that having the full roster of characters available will help.

I’m still searching for that perfect ship in No Man’s Sky, so no real progress has been made there.

In Downwell, I was able to make it to the third area on Hard mode, so progress is coming, bit by bit.

Yesterday a friend told me that the demo for the new King of Fighters was out, so I gave it a download for me and another friend of mine to try out. Neither of us were too impressed. Me and my group of friends spent a pretty good of time playing the older King of Fighters games, and in our opinion, 2002 is the best one, especially the version they released on PS2, as there are a veritable TON of characters. That said, the demo for KoF XIV didn’t impress me for a number of reasons. Firstly, it seems to play pretty slow. That said, it’s a minor complaint, and I might just be too used to Guilty Gear. Second, I’m not a big fan of the art style. When I think of King of Fighters, I think of sprite work. I realize that times have changed since the days of 2D pixelated fighters, but I don’t really like how the characters look in 3D. I just wish every fighting game looked like the latest Guilty Gear. Finally, and this is just a gripe of the DEMO, not what will be of the full game, but the character selection in the demo was baffling. Why give us new characters that nobody cares about in the demo, like the obvious Japanese Idol reference Sylvia Paula Paula? Give us Terry Bogard! At least they DID give us Mai, Kyo and Iori, but the other 3 characters seem kind of meh.

That said, I’ll probably still end up picking up the game when it releases August 23rd.

The Games of Summer

I’ve been putting some time into Guilty Gear Xrd: Sign, trying to get everything done in it before Revelator comes out June 7th. I finished the story mode, and I’m almost done with all of the character’s arcade modes. In fact, maybe you can expect a review of it soon?

This summer is going to be big on games for me. Lots of new games coming out that I’m excited for. Here’s my list:

June’s going to be a busy month!

What games are you looking forward to this summer? Post them in the comments and let’s chat!